When will the Apple Watch Series 5 be released, and what design changes, specs and new features should we expect? We round up the leaks and rumours concerning Apple’s wearable in 2019 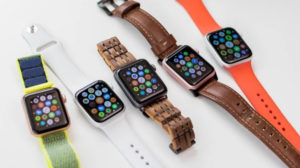 The Apple Watch Series 4 was a major step forward for the industry-dominating wearable. Faster, slimmer and larger-screened than its predecessors, it also added new health features such as fall detection and improved heart sensors, and an ECG (currently for US users only, although that could soon change).

However, tech moves forward fast, and we’re already wondering what to expect from the Series 5. When will it be released, what will it look like, and what new features and specs will be included? In this article we round up the leaks and rumours – the latest of which is that a new sleep monitor has been undergoing tests for months at secret sites in Apple Park.

We expect the Apple Watch Series 5 to be announced in September 2019.

Apple appears to have settled into a regular release pattern with its watches. After an almost 18-month gap between the original and second-gen models, there have now been three consecutive launch events in September of 2016, 2017 and 2018:

As of January 2019, here’s the current pricing of the Series 4 in its cheapest form (aluminium, with a Sport Band or Sport Loop):

These numbers all represent a step up from previous years, matching a general trend with Apple lately that has seen fairly drastic price hikes in its iPhone and iPad ranges too. We hope that the era of ballooning prices won’t last long, and that the company will aim to bring in the Series 5 at the same starting cost as the Series 4.

As ever in these discussions, however, we have to mention Brexit. That’s slated to happen at the end of March 2019, and the political fallout from the event may lead to a loss of confidence in the pound – if so, UK consumers will probably find themselves paying more for imported goods. 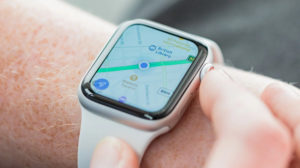 Most people outside the Apple journalism bubble would say that the Series 4 looks exactly like the previous three Apple Watches, and it’s hard to argue – the overall design language, the curves and edges, the proportions, are all close to or the same as before. However, in a world of barely noticeable iterative updates (and following three models that really did look exactly the same), we can recognise that the Series 4’s design changes were comparatively radical.

Essentially the screen is bigger but flatter, and you get significantly more screen space without having to carry any extra bulk on your wrist. Okay, it’s not quite up there with switching to a round display, but we take what we can get.

In any case, the history of Apple Watch design makes us cautious about expecting much of a change in the 2019 update. Having carried a virtually identical design for three generations and four models, we expect Apple to keep things basically the same this time – perhaps bringing back the ceramic case, as Ming-Chi Kuo predicts for 2019 – and focus on internal changes for the Series 5.The aforementioned round screen will have its backers again this year, as it does every year, but this would create difficulties with watchOS: Apple won’t want to have square- and round-screen versions of the software running on devices simultaneously. And we expect to hear more about straps with built-in sensors or other modular accessories, which have been spotted in Apple’s patent activity. But the most likely outcome in terms of design is the most boring, we’re sorry to tell you.

The obvious stuff first: the Apple Watch Series 5 will come with a bespoke S5 processor chip that offers theoretical speed boosts over the previous generation – but this won’t be apparent in real-world usage because the Series 4 will still be able to run all the available apps and the current OS with ease.

The S5 will offer greater future-proofing, however. At time of writing the original and Series 1 and 2 are showing their age, and the 3 and 4 are likely to stop providing top-speed performance around two and one year(s) earlier than the Series 5 respectively.

Onboard storage was upgraded relatively recently (16GB was introduced on the Series 3 for cellular models only, and included across all Series 4 models; all previous editions came with 8GB) and tends to be a low priority for wearables. For these reasons we expect the Series 5 to come with 16GB again.

Could Apple bump the Watch’s screen sharpness? The Series 4 models have higher resolution than the previous generation, but this only reflects their larger screen area, and the pixel density remains the same 326ppi offered since the original. We can’t say we’ve ever found any Apple Watch screen unacceptably blurry, but we used to say the same thing about the iPhone 4, and look how far things have moved forward there.

Finally, we’ve noticed a gradual falling-off in battery performance since the Series 2. Each generation since then has, in our subjective tests, lasted a little less time between charges than the model before, the result of more powerful chips, bigger screens and a lack of extra space for larger battery cells. If Apple is willing to compromise in other areas, or if battery tech has moved on enough to make it possible, the Series 5 may be able to reverse this disagreeable trend.

In terms of new features, it’s harder to make predictions. In the UK, of course, it would just be nice to finally get access to the ECG feature – and Ming-Chi Kuo predicts it will spread to more countries in 2019, without specifying which – but we imagine that health and fitness will remain Apple’s priorities here.

The long-expected glucose sensor may appear at last, for example, while we’d like to see the accelerometer’s performance sharpened up such that the device is able more reliably to guess what workout the user has started doing, and to do so more quickly.

Bloomberg’s Mark Gurman, meanwhile, believes that an upcoming Apple Watch update will see a greater emphasis on sleep tracking. In a Feb 2019 post he claimed that the company had been testing a sleep monitor for several months at secret sites on its Apple Park campus, citing “people familiar with the work”.

If that sounds appealing, prepare for disappointment, because Gurman names 2020 as the likely release schedule. That would fit with the Series 6 launch, by current patterns, rather than the next update.

We’ve known for a while that Apple is interested in sleep tracking, which fits in neatly with its current emphasis on health and life balance. It acquired Beddit in 2017 and sells the firm’s Sleep Monitor strip; and there are plenty of third-party sleep-tracking options on the App Store.

The Apple Watch Series 5 will come with watchOS 6 preinstalled.

This software update will have previously been announced and demonstrated at WWDC 2019 in June, but the final public version of the software will be released to coincide with the launch of the Series 5.

We don’t yet have any idea of what to expect from watchOS 6. One obvious upgrade, however, would be to allow multi-user Activity competitions. watchOS 5 allowed Watch owners to compete directly for the first time, but limited the number of participants to two, for no practical reason that we can see.

There are currently no comments.